Bernhard Friess, Director for Maritime Policy and Blue Economy at the European Commission, DG MARE, looked back at 5 years of Blue Growth policy at the European level and compared the situation with the development of the fishery sector. The fishery sector was in deficit 10 years ago while today it is highly profitable. This is due to the fact that fish stocks have recovered. There is no Blue Growth story without healthy marine resources. Action fields that DG MARE is pursuing currently and in the near future include:

In a next step, investments in the blue bioeconomy will be facilitated by making use of the Juncker Plan or the European Investment Bank (EIB). As part of this process it is foreseen to establish a Circular Bioeconomy Fund, which is financed with € 50m from the EIB.

Another line of action is the launch of the call for Blue Growth demonstration projects, financed with grants from the EMFF. 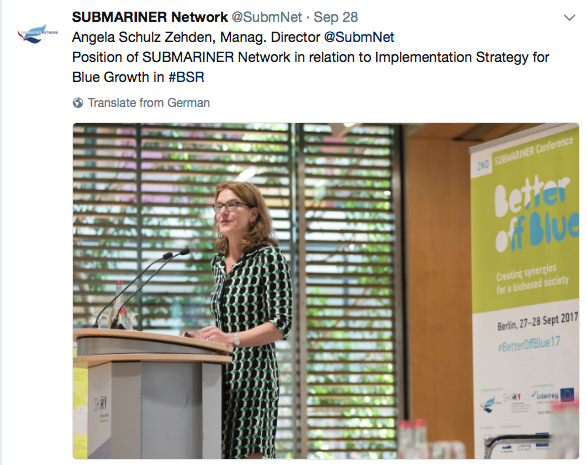 Angela Schultz-Zehden, Managing Director of the Submariner Network EEIG, presented the Conference Declaration and invited rapporteurs from the parallel workshops to highlight key messages identified by them in this context: 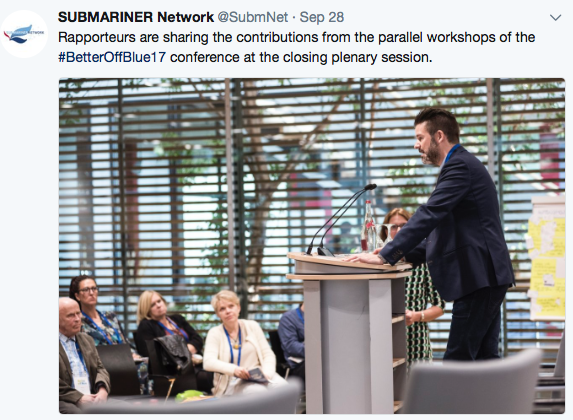 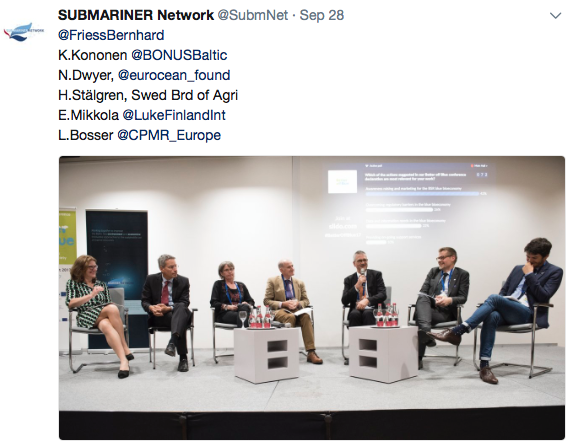 During the panel discussion that followed, several of the points made in the Declaration and by the workshop rapporteurs were picked up. Bernhard Friess, Director for Maritime Policy and Blue Economy , at DG MARE, European Commission, agreed most strongly with the assertion that awareness raising and marketing is an important action field for the blue bioeconomy. Kaisa Kononen, Executive Director of the BONUS programme, stressed that indeed a prerequisite for all BONUS projects is a demonstrable level of sustainability. Scientific excellence remains an important cornerstone for blue growth. She informed the audience that the BONUS synthesis calls are currently open, and that the next regular BONUS calls will be in 3 years’ time.

Eero Mikkola, Senior Specialist at the Natural Resources Institute Finland pointed out that blue bioeconomy players should ensure that they communicate and cooperate also with the non-blue bioeconomy, which is sometimes already more advanced. Hans-Olof Stålgren of the Swedish Board of Agriculture said that the EMFF implementation schemes at national / regional level should be revised allowing a transnationally coordinated approach, as we are all sharing the same marine resources. The PAC Bioeconomy is working in this direction.

Lucas Bosser, Policy Analyst at the CPMR emphasized that funding programmes do not always provide an easy labelling for blue bioeconomy projects (relevant topics are often spread widely across a variety of other themes). Flexibility here would improve the number of transnational initiatives. Ned Dwyer, Executive-Director of the EurOcean network said that  it is important to go beyond awareness-raising and actually aim for co-creation / co-design of blue bioeconomy projects, as this approach is more inclusive of citizens and thus creates local / regional ownership. Real stakeholder participation, ethics and gender equality should be part of the project development process.

Better off Blue conference declaration by A. Schultz-Zehden

When should the next SUBMARINER conference take place?

Which actions suggested by the Better off Blue conference declaration are

most relevant for your work?