Whilst most were enjoying their summer holidays, Guldborgsund Zoo was a hive of activity, preparing together with DTI for the reception of 105 catfish (Clarias gariepinus) fingerlings – the inhabitants of the second phase of the Danish InnoAquaTech Recirculating Aquaculture System (RAS) demonstration and dissemination pilot, which is part of a temporary exhibition and will run for the next three months.

Already in May, technological and practical expertise regarding RAS were being transferred from the wise heads of the University of Rostock (UROC) Aquaculture and Sea-Ranching InnoAquaTech partners to the non-experienced-in-fish-farming heads at Danish Technological Institute (DTI), when they came together to survey the Danish pilot within the Guldborgsund Zoo in Nykøbing Falster. The transfer of technology resulted in a design suited to the purpose.

The pilot design is made for 100 catfish divided into 2 x 500L tanks (50 fish in each). Water from Tank 1 is circulated through Tank 2 and from there water from both tanks passes into the sedimentation tank, where heavy particles fall as sediment to the bottom of the tank. The remaining water passes through the biofilter, a bacteria rich zone, that treats the water by transforming the ammonia into nitrate. After entering the sump the water is recirculated to Tank 1. The novelty of this system is the possibility to pass an amount of the nitrate rich water (which is normally periodically and partially flushed out of the system into the wastewater system) into the 1000L algae tank to nourish their growth. The algae basin, which is inoculated with 20L of microalgae polyculture, is placed outside and connected to the RAS inside the exhibition room. Just exactly how much nourishment can be gained from 100 African catfish to feed the protein-rich microalgae remains to be researched in this phase 2 of this pilot. 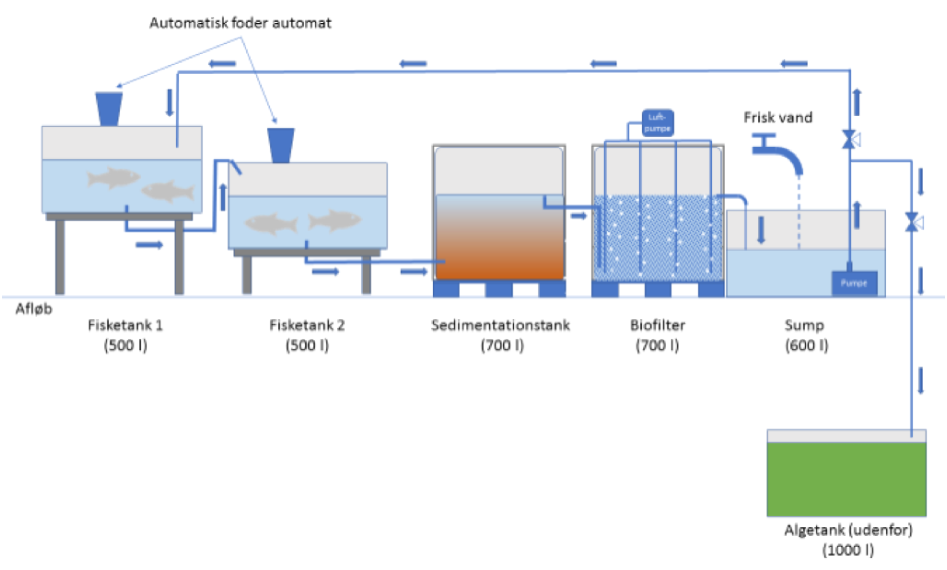 On the 18th of July 2017, Reiner Elies, chairman of the board of Fischgut Nord eG, delivered 100 freshly produced African catfish fingerlings, from their German production facility of PAL Anlagenbau, Abtshagen to their new home in Denmark. An expert in this species, he briefed the Danish partners in matters of best practice for catfish cultivation and discussed with them the peculiarities of the feeding at this early stage of growth.

Apart from learning about the practicalities of operating the RAS pilot, the system is performing well without mortalities. Within the next weeks, the project aims to integrate the overflow to the algae basin in the garden, to use some of the nitrate rich effluent water and to investigate the mass balance between fish and plants (algae).

Since the last week in July, the pilot has been visited daily by up to 600 zoo guests. The bi-lingual (DK/DE) information material is attracting adults and older children to find out more about InnoAquaTech, African catfish, microalgae, the pilot and the topic of bio-economy. The next task here is to assist the Zoo in defining some educational material for local school visitors this autumn.