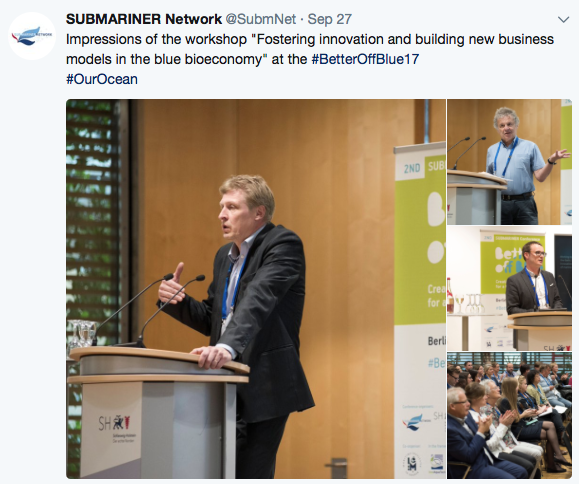 Andrius Sutnikas of Klaipeda Science and Technology Park began the business and innovation panel with a short overview of the blue economy today. The blue economy in Europe currently employs 5.4 million people and corresponds to €500 billion of added value annually. The main focus sectors currently are aquaculture, coastal tourism, blue biotechnology, ocean energy and seabed mining. He warned that even those industries labelled as emerging in 2017 will not yet be fully established by 2030. He also emphasised that when it comes to (blue) sustainability, the ultimate choice and thus the responsibility, lies with the consumer.

Jaakko Seppälä gave a short overview of his innovative environmental monitoring company EHP Environment. The idea started with the challenges presented by checking the water quality of landfill sites at 6 month intervals. The need for more continuous data monitoring inspired the SME to develop its innovative “smart remote buoys”, which deliver a continuous stream of data and for smartphone reading. A new area which the company is now exploring and developing its products for is environmental safety, for example in the context of aquaculture in icy environments, where their online oxygen monitoring solution can offer data on the fish under ice. Though their pioneering work has been in part been supported through ERDF mechanisms, the key financing component has been self-investment. EHP environment is now at a stage at which it mostly covers R&D costs through client purchases. Jaakko Seppälä emphasised that raising the level of private investments in pioneering technologies was key to strengthening the innovation performance of the region.

Torben Wallach of Musholm / Danish Aquaculture presented the case for increased aquaculture in the BSR combined with innovative compensation mechanisms. Currently, around 10% of EU fish comes from aquaculture, with ca. 5,000 tonnes of rainbow trout being produced annually. Torben Wallach argued that this percentage should be increased for multiple benefits. Compared to other livestock, the production of rainbow trout has clear environmental advantages. For example, kilo-for-kilo trout production emits ten times less CO2 than beef production. It also uses far less water, and yields a much higher ratio of edible meat than many other animals (68% compared to 21% for pork and only 18% for poultry). However, in order to significantly increase the level of aquaculture without damaging the environment via an increased nutrient load, compensation mechanisms must be explored and developed. The on-going Interreg project Baltic Blue Growth is testing the use of blue mussels in the BSR in pilot sites and aims to demonstrate the cultivation of the filtrating mussels for human consumption. Thus, the scheme would be both a compensation mechanism and an added value by itself. 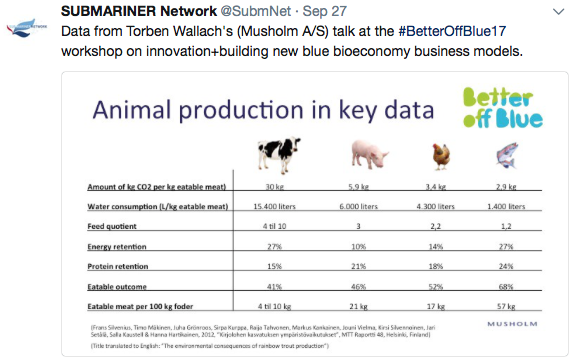 Tomasz Jałukowicz of the Ministry of Science and Higher Education, Poland, and also Policy Area Coordinator Innovation for the EUSBSR gave an insight into the innovative ways in which actors and regions have come together to put blue growth into action. In this context, the PAC Inno has found it useful to identify the drivers of innovation as a basis for collaboration and now applies strategies for market-driven, knowledge-driven and challenged-driven innovation. It is particularly important in its role as a connector of actors across the BSR. The on-going Interreg project Smart Blue Regions has to date been commonly recognised as one of the best examples of bringing regions to work together on their innovation strategies (specifically, RIS3). He also emphasised the importance of the project platform approach for inter-project collaboration and making the most out of existing synergies – particularly for lessons learned in the realm of innovation.

Susan L. Holdt of the Danish Technological University (Food) and chair of the Seaweed Network in Denmark described the process of developing the network to help innovation in the sector. Starting as a small scale volunteer network, the Seaweed Network eventually expanded to include all kinds of seaweed stakeholders, especially companies, universities, restaurants (and individual chefs), fishermen, and local authorities joined the “Tangnet”. An industrial fund helped the network prepare SMEs in the sector to pitch their innovative products internationally, for example at the International Seaweed Symposium. Eventually, the successful growth succeeded in a nationwide seaweed organisation. It is now focussed on helping overcome regulatory barriers, e.g. the often conflicting requirements regardint health and safety where seaweed is concerned across food safety agencies. It is also a channel for promotion and dissemination, for example at food fairs.

Some ideas from the panel discussion on what might help innovation in the bioeconomy in the BSR were a call for smaller, flexible and dedicated sector calls for projects. The panel also added that flexibility and adaptation were key to successful innovation (for example allowing for mussels to be reared in the Baltic and then transferred to the North Sea – with higher salinity – for the last growth stages). Also, multifaceted data collection and storage methods relying on innovations such as cloud computing were highlighted as a way to ensure the forward-facing approach of blue growth.

Fostering innovation and building new business models in the Blue bioeconomy by A. Sutnikas

Aquaculture and mussels by T. Wallach